Triad of One is a visual novel about three bodies (corpses) controlled by a mystery fourth entity; The "entity" who control these, otherwise soulless bodies, make uses the "shadow memories", the skills, the capabilities and even flaws to affirm its will. The elven maiden will provide its Intelligence (INT), the tough dwarf will provide (both physical and attitudinal) Strength (STR) while the last one... the human, will provide Dexterity (DEX).

But "they" will not use these skills for fight, but obtain information from various NPCs across the lands. Each skills will offer two talking options (for a total of six): one of them will allow you to advance, while the wrong one will antagonize the NPC you're talking with... so, pick careful, don't haste, take your time... what the NPCs says will be always the clue for the next right answer! You won't get to pick (or even read) your exact words to use, instead a fix and clear set of choice will represent the approach (and who among the tree) you will take with each NPC. The basic choice/attitude to pick from  will be:

Elf -Intelligence - INT: "We just got things that get to be done"

Good use: Comply (the elf will try to comform/adapt to whatever the NPC say or said

Wicked use: Deceit (one good lie can bring you to many place, open many doors... if not shutting you one in the face)

Good use: Awe (somewhat scary, but in a good way. Use the blend of good/right, the black/white/grey, the absurdity of the logic to inspire the NPC in front of you about the terrifying awesome thing the life/unlife is made of)

Wicked use: Fright (definitely scare: such life and death can be. The nihilism, the vanity or illusion of being part of something greater. There's only one greater thing.. which don't give a damn about you. Remind those NPC who they have no real place in existence, there's no protection or defence. Only one big, scary, everything that endlessly swallow and vomit itself)

Dwarf - Strength - STR: "Our people count on our will, our determination, to stay safe"

Good use: Brace (Don't people deserve protection? well, NPC need that too: sometime they need to feel safe, need to know there's someone is against the evil because its the only natural thing to do)

Wicked use: Daunt (People often think they can do whatever they want with anyone, well we got a tough dwarf equipped with a sharp and sound axe to remind those NPC that's... not nice to go around and mess with people) 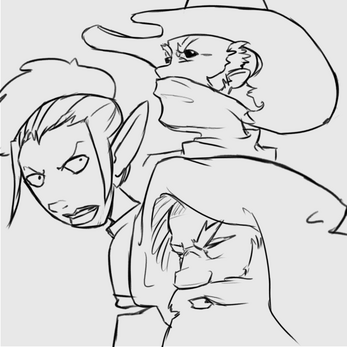